The Church of Saint Peter and Saint Paul is headed by the Most Reverend Prof.Dr. Frederick P. Burckle von Aarburg since 1996.

The title “archbishop” was introduced first in the East, in the 4th century, as an honorary distinction. At the present day the title of Archbishop is retained in the various Orthodox (Oriental and Eastern) Churches, the Anglican Church, the Roman Catholic Church, and some Evangelical Churches. The Archbishop designates and consecrates the Ministers, Deacons and Deaconesses, Archdeacons, Regional Bishops and Bishops “in partibus infidelium”. Being a worldwide ministry and church, we have many dioceses.

Hereby integrate as inheritance of the Historical, Spiritual and Religious History of our House, the Sovereign Chivalric and Religious Order of Saint Paul on which Rightful authority was granted to H.G.Frederic Patrice H.Bürcklé called von Aarburg by His Beatitude Ignatius IV (+ of blessed memory),Primate of the “Greek Orthodox Patriarchate of Antioch and All The East”See in Damascus, by document dated 23/05/1987, from Damascus (Syria), signed by Bishop Elias Kfoury, Vicary, and registered with the Greek Orthodox Patriarchate of the Antiochian See under the No.87/177/552, and then formally given to us during a reception in the presence of His Beatitude Ignatius IV, and Monsignor Gabriel Saliby(+), on June 23d, 1988, at the headquarters of the Diocesan Administration, 22 Avenue Kleber, Paris (16) Antiochian Orthodox Metropole for Western and Central Europe.

Divine Rights and Sovereign Background
The theory of Sovereignity following which the Kings are invested of their Power by God, comes from the Epistle of Paul to Romans: “Let every soul be subject unto the higher powers. For there is no power but of God: the powers that be are ordained of God… For rulers are not a terror to good works, but to the evil… For he is the minister of God to thee for good… Wherefore ye must needs be subject, not only for wrath, but also for conscience sake.” – Rom 13:1-5. This tradition was set by Constantine (4th century): The Royal office is sacred, certified by the anointment ritual (NB1) granting legitimacy to the Power. Without the Church a King does not hold the Divine Power.

Summary about the Divine Right in History
Let’s look back in history. In France, since 500 A.D., when Clovis was baptized in the city of Reims, following the tradition by Bishop St Remi, the Kings of France were anointed in this city. In 1804, when Napoleon Bonaparte had the Parliament voted an hereditary Empire, he needed to be consecrated by the Pope; France being a Catholic Country then. The story between Pope Pie VII and Napoleon is not the purpose of this introduction; it is only to state that Napoleon needed the spiritual and Divine Right given and exercised by the Pope in order to legitimise his Title. In Germany, Frederic II (1194-1250), King of Sicily and German Emperor, as deposited during the Council of Lyon in 1245 by Innocent IV.

*N.B.
1. Anointed: The one who received unction (NB2) – The gesture of moistening with oil the forehead of a new King invested him with a religious character. This meant the Head of the chosen people was set aside for God, becoming His representative on earth.

2. Unction: Anointed and Messiah have the same meaning, following the Jewish tradition, the one who received from God an unction consecrating him as the Head and liberator of the chosen Nation.

Episcopal Statements:
1. We say a Monarch may grant nobility titles as long as he reigns. A monarch either deposited or in exile, or his legitimate descendants may issue Letters Patent and elevate to Peerage an individual, as long as they were anointed “in partibus” by legitimate Prelates from the various churches of Christ.

2. We say the Heads of the various churches of Christ may grant nobility titles. But true legitimacy comes from God, and therefore from the Church. That is the reason why we are vested with the power of acknowledging nobility titles, through our chivalric Order and its College of Nobles and Chivalry.

History of the Holy Order of Saint Paul in Brief
Hospitality, defense of the feeble and the persecuted, teaching and care of the sick are the human and earthly manifestation of the Divine part in us.

In actual fact the heavenly origin of the Chivalric Orders goes back to the Patriarchs Abraham, Loth and Tobie; They exercised hospitality when hosting the angels.

During the Roman Empire the Orders took shape, but it is truly with the birth of the Christianity that several hospitaller institutions were born. For those who welcomed our Lord, such as Martha who devoted herself to thrift and hospitality, are role models.

The very first Christian Order (St. Lazarus) was established during the first Council of Jerusalem by the Apostles, after Pentecost, before parting, in 34 A.D.

Paul and Barnabas helped Saint Peter set up the Antioch See in 42 A.D. One may say the Order of St Paul was already established as an Ordo. The Holy Apostle was entrusted with the financing of the Churches, and some men were in charge of transporting funds as well as protecting the Apostle.

For nearly two millennium the Order was geographically bound to Turkey and the Middle East. Its members formed some kind of brotherhood within the Oriental Church.

At the time of the international armed conflict in Lebanon from 1974-1991, forewarning many dangers for Christendom, some High Ranking Dignitaries of the Oriental Orthodox Church vested Count Frederick P.Burcklé with the Divine Command to organize the Order as an International Institution. 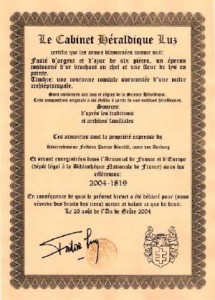 The Episcopal “fons honorum”
In accordance with an ancient tradition now older than a millennium, the Bishops and Archbishops possess a real “ius honorum”, which is exercised only partly.

The “ius honorum” is the prerogative and the right of a sovereign (and/or spiritual) power, authorized by law and/or the custom to create and to grant the nobility noble titles, the knighthood, coat of arms, and the honorary decorations and distinctions of merit.

The “fons honorum” (source or fountain of honors) rests within the person, the assembly or the elected body entitled to the “potestas” or to the public powers as materialized by the political or spiritual sovereignty, and sometimes both. The “fons honorum” is within a reigning or abdicated monarch (in exile) or the head of a royal house.

Council Resolution 5/09
There are more self-styled orders today. We definitively chose and decided, under Resolution 5/09 of the Grand Council, to limit the number of knights and dames to 1,000 (one thousand). They would either be nobles (with acknowledgement of our College of Nobles and Chivalry), or men and dames of God, such as clergy, pastors, priests and ministers. We are ecumenical, whereby our Church has signed various agreements of Full Communion with sister churches (e.g. Orthodox, Methodist/Wesleyan, and Anglican South America). As of Resolution 5/09, the Noble and Religious (Associative) Order of Saint Paul (N.R.S.P.) is now the Church’s arm for awarding honors and privileges. – By the Decree and Decision of the Grand Council, 5/09.